(Finally the website and email is back up & running. HUGE thanks to Pete M and others who helped sort this out. We have a bit of a back log of emails ect so bear with us or drop us a call for anything urgent, thanks)

Unions are now producing their responses to the TUC’s consultation on the question of a general strike. There is still time for trade unionists to put pressure on their leaders to support the demand for a 24-hour general strike. The need for co-ordinated action against the bosses and their government grows larger every day. As an example of the mood and what can be done, we produce a report below from Paul Couchman, Branch Secretary, Surrey County UNISON (in a personal capacity), about the mood in his union’s region.

Calls for a general strike of all workers came thick and fast at Saturday’s AGM of the UNISON SE Region. Resolutions calling for coordinated 24 hour general strike action came in from Surrey and Portsmouth local government branches and from Bucks Health branch. Only one person spoke against the motions with speaker after speaker pushing for UNISON’s leadership to take the lead within the TUC.

In moving the Surrey motion, I argued the need for our union to give a lead to the millions of working class people already struggling in Britain. Food banks are appearing in Surrey County Council offices for the first time in living memory. I also said that the trade union movement needs a general strike to remind the government we exist and that workers hold the real power in society.

Delegates from social workers to admin workers to health workers all spoke of a growing mood of anger and determination amongst UNISON members and the support that could be built across the whole union for a general strike. James Morbin from Oxford Health explained how the tragedies and scandals now unfolding in the NHS are a direct result of the Con Dem government’s privatisation and austerity programme. Jane Armitage from Surrey County reminded delegates how many new members joined UNISON when we took coordinated strike action on pensions.

All three motions were passed overwhelmingly by the 100+ delegates present and the meeting agreed to send them as a combined motion to the UNISON national conference in June. Many delegates made it clear that we don’t want to wait till June for our national leaders to step up to the mark but agreed that the motion should go to conference just in case we are still waiting. (Kevin Parslow NSSN Assistant Sec)

*************
£££££! The NSSN needs your financial support too! Our money to put on events, flyers, support protests etc. comes from you all and your union’s branches, trades councils and anti-cuts groups & individual standing orders. Can we ask you as an urgent matter to make a donation for our campaigns and & re-affiliate? If you’re able to, please set up a standing order for of £2/1 a month? It would really! 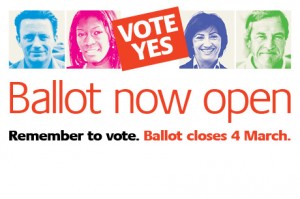 POA
POA had an excellent protest outside Parliament on February 13thaganist prison closures. POA General Secretary Steve Gillan spoke alongside the union’s national chair PJ McParlin, John McDonnell MP and speakers from NAPO and PCS. NSSN national chair Rob Williams also spoke to give a message of support to the POA and paid tribute to the union for moving the general strike motion at TUC conference last September

Construction protest Chester – defend national agreements! There is a mass picket at the Capenhurst construction site near Chester / Ellesmere Port planned for 6am Wednesday 20th February, organised by Unite and GMB. Jacobs Engineering is refusing to sign up to full Blue Book terms (the national agreement covering this category of construction project). Delegations of construction workers from sites in Cheshire, Merseyside and Wales are already confirmed attending. Unite are providing transport from Liverpool Unite office, 5am at Jack Jones House. This is effectively BESNA for the Blue Book industry and we must defend ourselves as robustly as we did then. Site address: Urenco, Capenhurst Lane, near Chester, CH1 6ER. All NSSN supporters are urged to attend!

Turning Point to sack 2,600 staff and then impose lower pay

Unite Housing members at One Housing Group had apacked meeting to discuss industrial action over cuts. Please sign petition to support campaign against cuts. Branch members at the HCA are intending to ballot over pay. And the campaign for justice for sacked Unite rep grows at Peabody with another packed meeting and 5 new possible reps!

FBU
The greater London assembly meets on 25 February to decide the final budget arrangements of Mayor Johnson. FBU will lobby this meeting, “we are putting all supporters of the fire service and the police service on notice, that you should come and join us and make your thoughts known to the Mayor, before he makes one the most disastrous & reckless decisions any senior politician who has governed over London has done in centuries.” London FBU Fire service privatisation plans will “sacrifice lives on the altar of profit”

NUT
Strike to stop PRP – How can we afford not to?

RMT support Petrit Mihad fighting to save his job with Sodexo

Blacklist support group news : Great coverage on BBC Wales here Radio 4 documentary The Report is giving an entire programme over to blacklisting at 8pm Thursday 14th Feb here 3. Civil Disobedience at Crossrail A flashmob closed down Oxford Street for over 90 minutes during rush-hour traffic on Thurs evening outside the Crossrail site in protest at the ongoing victimisation of UNITE rep Frank Morris and other union members sacked from the Crossrail project because of the blacklist. Many thanks to the Widnes drivers and Howden Joinery workers and other supporters who joined the protest. here 4. Welsh Assembly to vote on barring blacklisting firms from all publicly funded projects in Wales. This follows on from other local authorities around the country passing similar motions. here 5. Blacklisting inquiry has been called for in the Scottish Parliament by Neil Findlay MSP here 6. Dundee March & protest against Blacklisting, 10:30am Sat 9th March, Albert Square, Dundee here Blacklist Support Group. video

PATIENTS AND DOCTORS UNITE IN DEFENCE OF LONDON A&Es WEEK OF ACTON AT HOSPITALS ACROSS London“This is to alert you to the launch of a new London-wide coalition of doctors, patients and health workers opposed to the downgrading of A&Es and other vital hospital services in the capital. Angered by the ‘divide-and-rule’ policies of NHS bureaucrats and politicians that set one hospital against another, Defend London’s NHS is calling for a London residents to come together and defend all their services. This will be followed by a Week of Action involving meetings, protests and vigils outside London hospitals faced with imminent threats to their A&E and maternity units. Details are constantly being up-dated but at present the actions include”:

• A rally on 15 February in Lewisham in protest at the recent decision by the Secretary of State for Health to downgrade the hospital’s A&E and maternity services.
• Simultaneous rallies in Hammersmith and Ealing on 16 February in protest at NHS North West London’s plans to downgrade A&E, maternity and other services at Charing Cross, Hammersmith and Ealing hospitals.
• a demonstration on 16 February in Kingston in protests at NHS South West London’s plans to close two out of five of the A&Es and maternity units serving the area.
*Defend London NHS is a non-partisan, residents-led campaign group bringing together representatives the majority of the anti NHS cuts campaigns. Contact: Mark Honigsbaum / John Dawson / Anne Drinkell Mobile: 07776 492 046 Twitter: @savehfhospitals, @honigsbaum, @JhnDwsn

Youth Fight For Jobs and Boycott Workfare are part of many groups celebrating the victory of Cait Reilly in the court of appeal this week. The victory in the Court of Appeal today has dealt a massive blow to the government’s work programme. The court ruled that being forced to work in Poundland for nothing but unemployment benefits constituted a form of forced labour. This ruling confirms what anyone with any sense could see all along. Working without being paid a wage is the very definition of slave labour. A day’s pay for a day’s work is a basic right in any supposedly democratic society.

15 – 18 February is a UK-wide weekend of action against fuel poverty! whether on low wages, retired, unemployed, or subsisting on welfare benefits — dying of cold in their own homes, or being forced to go without meals to pay bills. The main events planned so far are in London, Edinburgh, and Leeds. In Central London, on Saturday 16 February, we are holding a Fuel Bills Assembly where people will be able to speak out about their own situations and discuss together what we can do about it. There will be more such events and action in the future. Please see model motion, and click on link to model motion. fuelpovertyaction.org.uk 07586 482 157 Twitter: @FuelPovAction [email protected];

Britain’s biggest pensioner organisation, the National Pensioners Convention (NPC) has described the government’s plan to reform social care funding as “about as credible as a Findus Lasagne” because it lacks sufficient funding to tackle the problems that pensioners face. “It’s time we merged health and social care and had a truly integrated system which was funded through general taxation – like the NHS – rather than put all the responsibility on pensioners and their families. Getting older and needing care isn’t a lifestyle choice – so why should the cost of care not be shared by society as a whole?” Dot Gibson NPC general Sec. [email protected] Neil Duncan-Jordan on 07432-575251

“Over 250 council workers and anti-cuts campaigners protested against the cuts at Southampton budget meeting. As the Southampton Labour Mayor ruled against allowing the Anti-Cuts Councillors amendment to be debated, the chant went up in the public gallery, “Let them speak, let them speak!” As the budget debate ended and the Labour councillors carried out the ConDem cuts, a local Unite activist got up in the public gallery and declared, “That’s three unelectable parties in Southampton!” More concessions were won today for keeping youth services going in the city, as one youth worker said after, “We are still at war but we’ve won a battle!” Nick Chaffey NSSN Southern.

Tunisia Killing of Chokri Belaïd provokes mass protests across the country. UGTT union and opposition call for a general strike

Construction protest Chester – defend national agreements! There is a mass picket at the Capenhurst construction site near Chester / Ellesmere Port planned for 6am Wednesday 20th February, organised by Unite and GMB. Jacobs Engineering is refusing to sign up to full Blue Book terms (the national agreement covering this category of construction project). Delegations of construction workers from sites in Cheshire, Merseyside and Wales are already confirmed attending. Unite are providing transport from Liverpool Unite office, 5am at Jack Jones House. This is effectively BESNA for the Blue Book industry and we must defend ourselves as robustly as we did then. Site address: Urenco, Capenhurst Lane, near Chester, CH1 6ER. All NSSN supporters are urged to attend!

Spirt of 45 Ken Loach’s film on the battle for the NHS will be out in cinemas across the UK.

VISTEON 4th Anniversary Demonstration meeting at London Unite HQ at 10.45am and then to Westminster for rally and speeches

EUROPEAN DAY OF ACTION – NSSN SUPPORT THIS EUROPE WIDE CALL OF ACTION AGAINST CUTS & BOGUS AUSTERITY FOR US and action on that day and others to co-ordinate. TUC Pre-Budget Rally: A Future for Families

RESISTING AUSTERITY in Europe and in the UK 10.00 am –16.00 pm, Congress House, WC1 3LS. Key discussions on: International crisis, International resistance/Austerity in Britain, there IS an alternative & how trade unions can fight austerity. Book your place on 020 7467 1218, [email protected]

Our apologies: We are currently unable to directly subscribe or unsubscribe you to the email bulletin: Go to this link to do either: https://lists.riseup.net/www/subscribe/shopstewardsnet