Now Royal Mail has announced their intention to close its final salary scheme in May 2018, breaking the promise made to postal workers when the company was privatised. The CWU estimates that workers could lose a third of its retirement benefits as a result. We support the call by many workers for Royal Mail to be re-nationalised. We think this should be part of Jeremy Corbyn’s General Election manifesto. 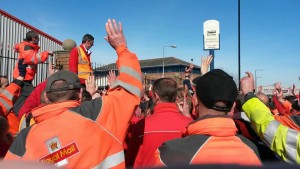 The NSSN pledges our full support to all these workers fighting to avoid a retirement of poverty by keeping the bosses to their word. Too many have already seen their pensions sacrificed on the altar of profit. Support the strikes!

‘Organise the fightback!: How do unions resist the new Tory anti-union laws and fight for a workers’ Brexit?’

The NSSN calls on the TUC to implement the policy passed at last September’s TUC Congress which was moved by the RMT which includes:

“Congress believes the General Council needs to convene an urgent conference of affiliates to provide a practical forum, including workshops, as to how to best coordinate our legal and industrial response to the Act in line with policy already set by Congress.”

and an amendment from the FBU:

“Congress should discuss all options for challenging the new legislation. This should include stepping up the campaign to scrap the Act and other anti-union legislation as well as the practical steps to be taken to support any unions and groups of workers threatened by this anti-worker legislation.”

The 11th annual NSSN Conference will be on Saturday July 1st 2017 from 11am in Conway Hall, 25 Red Lion Square, London WC1R 4RL. It is open to all trade union and anti-cuts campaigners Facebook event

This is a video of the NSSN TUC Congress Rally on 11 September – Tories Out! Keep Corbyn!

Get your trade union branch or trades council to affiliate to the NSSN – it only costs £50. Already affiliated? Please think about renewing it. Also, many of our supporters pay a few pounds a month. You can set up a similar standing order to ‘National Shop Stewards Network’, HSBC – sort code 40-06-41, account number 90143790. Our address is NSSN, PO Box 54498, London E10 9DE. Affiliation letter is below

RMT confirms strike action on Virgin East Coast over threat to guards, stations and travel centre roles – Rail union RMT today (April 13) confirmed 48 hours of strike action on Virgin Trains East Coast as the union executive registered it’s disgust at the ever-increasing contempt being displayed to our members on board trains, on stations and in travel centres by the employer…In light of all the above, RMT’s executive has agreed to instruct our members at VTEC (except engineering grades) to take 48 hours of strike action by not booking on for any turns of duty scheduled to commence between 00.01 hours on Friday 28th April 2017 and 23.59 hours on Saturday 29th April 2017 read more

RMT members vote for action over “London Bridge Three” – Tube staff sacked and disciplined for stopping violent assault (18 April) – Tube union RMT has confirmed today that station staff across the London Bridge and Waterloo groups have voted for both strike action and action short of a strike in a ballot after one member was sacked and two others disciplined for intervening to stop a serious assault by a fare-dodger on fellow staff members including one who was pregnant. The ballot result will now be considered by the union’s national executive read more    Sign the petition: Defend the London Bridge Three read more

RMT protest in Aberdeen this week against poverty pay on Streamline Shipping’s MV Daroja (18 April) – MARITIME UNION RMT will be demonstrating in Aberdeen this Friday, 21 April, against poverty pay on Streamline Shipping’s MV Daroja. Workers are paid as little as £2.56 per hour on freight routes between Aberdeen and Orkney and Shetland on the Cyprus-flagged ship. Streamline has relentlessly profited from this exploitation, receiving over £3m from the Scottish taxpayer. The protest will take place on Friday 21 April, 11.45am, Aberdeen Harbour, Blaikies Quay/Black’s Lane, Aberdeen, AB11 5PU read more

RAIL UNION RMT is balloting members working for Arriva Traincare for strike action and action short of a strike over their latest pay offer (April 12) – The union had met with bosses at train maintenance company Arriva Traincare with a view to attaining a decent pay award for members. However, during the meeting it was made clear to the union’s negotiating team that the company was not prepared to enter into pay negotiations with RMT, as management asserted that Arriva Traincare do not recognise the union. Consequently, the company would only table a pay offer to a different union in the workplace. As a result the union’s executive decided to ballot members at the company. The ballot closes on Tuesday 2nd May read more

Woolwich Ferry strike on Tuesday suspended, as talks make progress in ‘bullying culture’ dispute (13 April) – Tuesday’s 24 hour strike (18 April) that would have hit travellers using the Woolwich Ferry has been suspended, as talks in the dispute over a bullying culture make progress. Unite said today (Thursday 13 April) that Tuesday’s 24 hour strike had been suspended to allow for further talks to take place on Thursday (20 April). Depending on how those negotiations progress with Briggs Marine Contractors Ltd, which runs the service on behalf of Transport for London (TfL), a decision will then be made about whether the 24 hour strike on Friday (21 April) goes ahead read more

More strikes at Fujitsu as ‘pay and pensions’ dispute hots up – Unite members working for the IT giant Fujitsu will strike for a further three days at sites across the UK in their long-running dispute over plans to axe one in five jobs and pension cuts. Workers at Basingstoke, Belfast, Birmingham, Bracknell, Crewe, Edinburgh, London, Manchester, Stevenage, Wakefield and Warrington will strike for 24 hours from 00.01 on Monday 24 April. There will also be a 48-hour strike starting at 00.01 on Thursday 20 April. The dispute centres on pay, pensions, job security and union recognition – and takes place against a background of Fujitsu’s plans to axe and offshore 1,800 jobs in the UK read more on Fujitsu dispute page. Send a message of support to [email protected] or Unite the Union, Fujitsu MAN34, Central Park, Northampton Road, Manchester, M40 5BP

The campaign to fight off the privatisation of Bromley Libraries has reached yet another crucial stage. The Council is expected to make a decision in May. We know that the main bidder remaining is Greenwich Leisure services (GLL). We are therefore beginning an immediate campaign aimed at GLL. The activities below will be accompanied by a report that we will prepare on GLL which we will launch as part of the campaign. Most of the activities below will be for only an hour – the idea is that we have a number of short, sharp demonstrations  to put the pressure on. We are also targeting Greenwich Council on the basis that Greenwich Councillors are on the GLL board. We are pointing out the fact that Labour Party members and Councillors in Bromley have been magnificent in their support for the campaign and that therefore Labour Councillors in Greenwich should now not only support the campaign but use their influence on GLL to get the bid withdrawn. Please do what you can to build for and attend the events below – Onay Kasab, Regional Officer Unite the Union:-

Derby Teaching Assistants have ended their 10-month dispute against 23% pay cuts after members voted to accept a new offer from the council. Their colleagues in Durham who have also been taking action against similar attacks marched on March 25th

Blackpool needs a pay rise: £10 now! – Launch Saturday May 13th from 10am Savoy Hotel Queen’s Promenade, Blackpool FY2 9SJ. Blackpool Fylde & Wyre Trades Union Council is organising a campaign aimed at improving pay and calling for investment to create long term employment opportunities available in the Blackpool and Fylde area. We are joining the call for the minimum wage to be a real living wage of at least £10an hour and will be working with Fight for 10 and fast food rights amongst others to win for all in our community read more

Reinstate Kumaran Bose – sacked by Samworths! The NSSN is supporting the BFAWU’s campaign in support of Kumaran Bose who was dismissed for speaking out and for organising a union in his workplace read more    Facebook group   BFAWU Statement On Samworth Brothers’ Sacking Of Kumaran Bose

Security Officers’ April 25-26 strike at the University of London – Around ten University of London buildings will be shut down on 25th and 26th April as the majority of the central university’s 60 security officers go on strike. The Independent Workers’ Union of Great Britain (IWGB) has sent notice of industrial action to Cordant, the company that has the contract for the provision of security officers in the University of London’s central administration buildings. The union is demanding an end to zero-hour contracts, proper itemised payslips, and a 25% increase in pay for all security officers, increasing the salary of the lowest paid officer to around £12 an hour. While the pay of other workers at the university has increased in recent years, that of security officers has stagnated, breaking a commitment the university had made in 2011 to maintain pay differentials between different types of workers. The picket will run from 7am to 1pm on Tuesday 25th and Wednesday 26th April – PLEASE COME DOWN to show your support to the workers and to the University! If you have any questions please just email [email protected] or call us on 07783719479 Facebook event

United Voices of the World union

International Workers Memorial Day (April 28) and May Day are coming up over the next weeks – send us your event and we’ll publicise it. Here  are events in London, South and East of England (SERTUC)

Support the Irish anti-water charge protestors who are facing trial for a protest in Jobstown. Join the protest outside the Irish Embassy in London on the first day of the trial on Monday April 24th at 2pm – 7 Grosvenor Pl, Belgravia SW1X 7HR

Buy the book ‘Blacklisted: The Secret War between Big Business and Union Activists’ Author: Dave Smith and Phil Chamberlain. Blacklisted tells the controversial story of the illegal strategies that transnational construction companies used to keep union activists away from work.

Blacklist Support Group financial appeal: the Blacklist support group is desperately short of funds, to continue the incredible work we need more finance, would you please consider making a donation, raise it at your branches and trade councils. Please make cheques payable to Joint sites committee and send to 70 Darnay Rise Chelmsford Essex CM1 4XA. Please forward onto your contacts many thanks Steve Kelly (JSC Treasurer)