NSSN 420: March this Saturday for a General Election to get the Tories out!

The NSSN is supporting this Saturday’s ‘Britain is Broken – General Election Now’. It is vital that the trade union movement mobilises to force out the Tories and fight for a government led by Jeremy Corbyn and John McDonnell on the pro-worker anti-austerity Labour manifesto from the 2017 General Election. This is the best way to unite workers and not allow them to be divided. 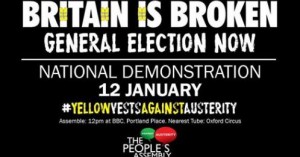 Get your trade union branch or trades council to affiliate to the NSSN – it only costs £50. Already affiliated? Please think about renewing it. Also, many of our supporters pay a few pounds a month. You can set up a similar standing order to ‘National Shop Stewards Network’, HSBC – sort code 40-06-41, account number 90143790. Our address is NSSN, PO Box 54498, London E10 9DE

Support the RMT in Manchester against far-right threats – the NSSN stands in full solidarity with striking Northern Rail RMT members who were faced with threats from the far-right last Saturday. We appeal to our local supporters to visit their picket line this Saturday in solidarity

All RMT Arriva Rail North Conductor, Conductor Instructor and Train Driver members had already been instructed to take action as follows, not to book on for on for duty between:

National dispute fund (DOO disputes) – If you would like to donate to the RMT National Dispute Fund which makes payments to support their striking members taking part in National DOO disputes then you can donate via PayPal using the donate button below or make a cheque payable to RMT National Dispute Fund and send it to the address below. Alternatively, you can ring their Freephone helpline on 0800 376 3706 who will be happy to process a credit card payment for you, or, if you would like to pay via internet banking, please email [email protected] for further details. Vicky Thompson, Finance Manager RMT, 39 Chalton Street, London NW1 1JD. Tel: 020-7529-8843 read more

RMT to take demands for a fair deal for workers on Brexit ferry contracts direct to Chris Grayling (8 Jan) – Maritime union RMT will be taking the demands for a fair deal for British workers on Government Brexit ferry contracts direct to Transport Secretary Chris Grayling on Friday morning. RMT will be holding a protest outside the DfT at 10am on Friday 11th January (Department for Transport, Great Minster House, 33 Horseferry Road, London, SW1P 4DR) setting out the following three core demands on the Government contracts:

Maritime union RMT will be holding a further protest on Saturday 12th January 2019 at 7am – 9am, Portsmouth International Port, George Byng Way, Portsmouth PO2 8SP. The latest protest will call for an end to Condor Ferries paying poverty wages on their ships. It follows and builds on a demonstration held in December. Condor is contracted by the Jersey and Guernsey governments to operate lifeline ferry services between Portsmouth and Poole and the Channel Islands. Their contract is up for renewal in 2019 read more

RMT suspends Boxing Day strike action on Bakerloo Line after significant progress in negotiations but other action still on – Other action still remains on and all CSA, CSS and CSM members in Charing Cross, Elephant & Castle, Oxford Circus and Piccadilly Circus Areas are instructed to take strike action by not booking on for any shifts that commence between:

Strike action at Barking depots – ASLEF members employed by London Underground at Barking District Line depot and Barking Hammersmith & City Line depot have voted overwhelmingly in favour of strike action after the company’s failure to address the abrogation of agreements. 85% of members voted for action on a turnout of 67%. Action will take place between 0001 and 2359 on Thursday 10th January and then 0001 and 2359 on Wednesday 23rd January read more

Support the Glasgow Equal Pay strikers – More than 8,000 union members – overwhelmingly low paid women – took strike action this November, with 10,000 marching to a rally outside the city hall on the first day of the strike read more

Unite recommends rejection of COSLA pay offer (8 Jan) – Unite the union has today (8 January) announced that its local authority committee have recommended the rejection of the revised pay offer from the Convention of Scottish Local Authorities (COSLA) following a meeting in Glasgow. The union will now hold a consultative ballot of its local authority membership on the pay offer commencing on Monday (14 January) with the recommendation. The ballot will close on 29 January read more

Strike planned at Yorkshire chocolate crumb plant over ‘shoddy’ pay offer (8 Jan) – Four days of strike action, from Saturday (12 January), are on the cards at an East Yorkshire chocolate crumb manufacturer over a ‘shoddy’ pay offer. The workers at Meadow Foods at Holme on Spalding Moor are due to walk-out at 18.00 on 12 January, after voting for strike action over a two per cent pay offer for the year starting July 2018. The action, which ends at 18.00 on Tuesday 15 January, is planned to hit night and day shifts over the four days read more

Workers at East Anglia print firm to strike again over two year pay freeze offer (4 Jan) – Print workers at Suffolk firm, CPI William Clowes, who have been given just two pay rises in the last 14 years, will take a third day of strike action on Thursday 17 January. The workers at the Beccles company will walk-out for 24 hours on 17 January in their dispute over the company’s offer of a two year pay freeze from April 2018. Unite which has 75 members at the Copland Way site, said that the management had adamantly refused to hold constructive talks since the workers last took a day’s strike action on 20 December read more

650 Durham bus drivers to strike for a week on Sunday in pay dispute (3 Jan) – Intransigent bus bosses are being blamed for the impending week-long strike on Sunday (6 January) by 650 bus drivers in the north east in a pay dispute, which will cause ‘severe disruption’ for travellers. The drivers, based at Darlington, Durham, Redcar, Stockton and Whitby will walk out at 00.01 on Sunday (6 January) until 23.59 on Saturday 12 January read more   Unite statement rebutting the claims of Arriva Buses in Durham

PCS & United Voices of the World

Joint Jan 22 MoJ & BEIS outsourced workers strike – On 22nd January 2019 receptionists, security guards and cleaners at the Ministry of Justice (MoJ), represented by United Voices of the World (UVW), and support staff at the Department for Business, Energy and Industrial Strategy (BEIS), represented by Public and Commercial Services (PCS) union, will walk out together on strike demanding the London Living Wage of £10.55 per hour, plus parity of sick pay and annual leave allowance with civil servants. Workers at the MoJ will also strike for a second day on 23rd January 2019. This will be the first co-ordinated strike between a TUC and a non-TUC union and the first coordinated strike between outsourced workers in government departments Facebook event

Please donate to the PCS and UVW strike funds

Beefeater Strike Suspended After Historic Royal Palace Offer talks over pension dispute (Jan 7) – Working people’s pensions are being eroded at an alarming rate, which will inevitably cause financial problems, not only for future pensioners but for tax payers, says GMB London. GMB have agreed to suspend tomorrow’s (Tuesday 8th January) strike action at Hampton Court Palace and the Tower of London to take up an offer of further talks from Historic Royal Palaces (HRP). GMB members are to be consulted following the result of the talks and if an improved offer is not acceptable to members the strike action on 15th and 22nd January will go ahead as planned read more

Firefighters win major pension legal case against government – the Fire Brigades Union (FBU) has won a landmark ruling in its dispute with the government over changes made to firefighters’ pensions in 2015. The long and bitter industrial dispute, which included strike action, means that firefighters on the new scheme will have to be put back on the previous pension scheme read more

Teaching unions start indicative ballot on pay and funding: ‘Hands up because enough is enough!’ – Following the Government’s failure to address the school and college funding crisis in the recent Budget, the National Education Union (NEU), along with NAHT and ASCL, are taking the unprecedented step of simultaneously consulting with their respective members on what steps to take next read more

Nurses and midwives first strike on January 30th (Jan 9) – Ireland’s nurses and midwives will go on strike for 24 hours on January 30th, it was announced today (Tuesday).
The union is legally required to give one week’s notice, but has given three to allow for safety planning. Should the dispute go unresolved, there will be further 24-hour strikes on 5th and 7th of February, and then the 12th, 13th and 14th. The strike will see INMO members withdraw their labour for 24 hours, providing only lifesaving care and emergency response teams.
The dispute centres on safe staffing in the public health service. The HSE has not been able to recruit and retain enough nurses and midwives on current wages.
The number of staff nurses fell by 1,754 (6%) between 2008 and 2018, despite an ageing, growing population making the health service busier.
This would be only the second national strike in the INMO’s hundred-year history read more

Read the latest about the Picturehouse dispute on Brixton Ritzy Facebook Page and those of Hackney, Crouch End, Central, Dulwich East and Duke of York Brighton

Mass Sackings at Deliveroo – What can I do about it? (22 Dec) – During the week leading up to Christmas 2018 Deliveroo took it upon themselves to sack (or ‘terminate’ in RooSpeak) hundreds of couriers, sending out identical emails alleging fraud on the part of the sacked couriers. No notice was given, and no opportunity for appeal. When challenged to give specific evidence of these fraud allegations Deliveroo has so far flat out refused. We can only speculate on why Deliveroo would choose to make such an audacious attack on their workforce, so close to Christmas. Perhaps it was a cynical ploy to increase staff turnover, weakening our collective power, or perhaps a bug in their terminator algorithm caused some overzealous culling read more

Poetry on the Picket Line – Saturday, 26 January 2019 from 19:30-23:30 at The Betsey Trotwood, 56 Farringdon Road, EC1R3 London – We’ve been gigging on picket lines and we’re indoors to launch our new anthology. Poetry from Janine Booth, Matt Abbott, Nadia Drews, The Repeat Beat Poet, Chip Grim, Lilly Driscoll, Tim Wells, Tim Kiely, Mark Coverdale and David Turner. The book will be available on the night for £5. T-shirts a tenner. All proceeds to strike funds. No door pressure but we’ll be passing the hat. You’ve guessed it: for strike funds Facebook event

Blacklist Support Group financial appeal: the Blacklist support group is desperately short of funds, to continue the incredible work we need more finance, would you please consider making a donation, raise it at your branches and trade councils. Please make cheques payable to Joint sites committee and send to 70 Darnay Rise Chelmsford Essex CM1 4XA. Please forward onto your contacts many thanks Steve Kelly (JSC Treasurer)