First it was the U-turn on tax credits, then Personal Independence Payment after Iain Duncan Smith’s resignation and now on top of the division over Europe, Cameron has been shaken by the Panama tax exposé. The Tories really are on the edge! The question is how do we push them over it?!

It’s clear that an increasing number of people want to fight and take action alongside the Junior Doctors, teachers and the steelworkers fighting to save their jobs.  Last Saturday, thousands demonstrated against Cameron outside Downing Street, in Sheffield on the PCS demonstration against the closure of BIS offices and in Lambeth to save libraries.

This Saturday April 16th, thousands more will be converging on London to march on the National Demonstration for Homes, Health, Jobs, and Education: End Austerity Now, which is now a ‘Cameron Must Go – Tories Out! mobilisation!

Let’s fill the streets of London this Saturday and then use it as a platform to demand from the TUC and the unions that they get together with the BMA,  NUT, the steel unions and everyone else fighting the bosses and the Tory cuts to call the mass demonstrations and joint strikes that can take out Cameron and his government! 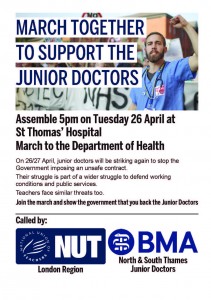 The Tories re-branded the minimum wage as the National Living Wage on April 1st. The 50p rise is nowhere near enough to take low-paid workers out of poverty pay and the under-25s are excluded! 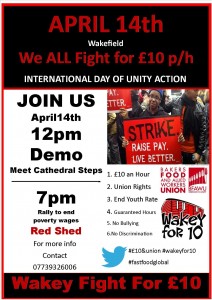 But we won’t be fooled by Osborne’s gimmick wage! To counter the Tory hypocrisy, a campaign is being launched to fight for a real minimum wage of £10 per hour with no youth exemptions. This is being headed by the BFAWU bakers’ union, the GMB and the Hungry for Justice / Fast Food Rights coalition (in which the NSSN campaigns alongside the BFAWU, John McDonnell Shadow Chancellor, Youth Fight for Jobs, Unite the Resistance, Disabled People Against Cuts (DPAC) and others).

There will be a big focus in Wakefield on April 14, where on the day there will be a demonstration and social. There will also be protests led by BFAWU fast food workers in Glasgow, London, Scarborough and Cambridge as well as the events in Wakefield. Join the April 14 protests or organise your own. Please also use and follow on social media – #FoolsGold #A1 #WakeyFor10 #10Now4All #10AndAUnion

For more information and details of protests around the country, see BFAWU, Fast Food Rights / Hungry for Justice and Youth Fight for Jobs websites

Support Simon O’Hara — Teachers at Small Heath School in Birmingham are continuing to take action to support Simon who remains suspended. You are encouraged to send messages of support to David Room at [email protected]  https://www.facebook.com/Reinstate-Simon-OHara-1090494714318024/

Clive Walder, a longstanding leading rep in the CWU had an appeal against unfair dismissal rejected by British Telecom on 9 November, confirming his sacking after 38 years of service. Clive is chair of the CWU Birmingham, Black Country & Worcester branch.

Clive worked in a BT call centre and was dismissed after an aggressive customer reported him to management just 33 seconds into a phone call. The decision was made without taking stress into account despite the local CWU branch reporting that 7% of staff at the call centre leave their jobs each month, some walking out mid shift. Management took the decision without consulting any medical advice or taking into account any mitigation.

Clive is a NSSN steering committee member and we will be supporting the campaign protesting the sacking and campaigning for his reinstatement. 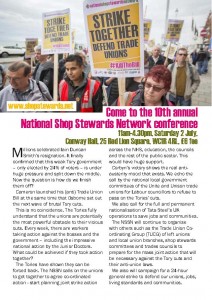 Get your trade union branch or trades council to affiliate to the NSSN – it only costs £50. Already affiliated? Please think about renewing it. Also, many of our supporters pay a few pounds a month. You can set up a similar standing order to ‘National Shop Stewards Network’, HSBC – sort code 40-06-41, account number 90143790. Our address is NSSN, PO Box 54498, London E10 9DE. Affiliation letter attached and here

Thousands turn out for PCS Sheffield march for jobs (11 April) – Thousands of PCS members and supporters, including shadow chancellor John McDonnell, joined a march for jobs in Sheffield on Saturday, vocally opposing plans to cut the business department’s office in the city. The lunchtime march and rally in the city centre was organised by PCS and Sheffield TUC in response to hundreds of jobs being hit in the city. At the end of January the Department for Business Innovation and Skills (BIS) announced plans to close its Sheffield site by January 2018, losing 250 jobs, 500 jobs are under threat at Revenue Customs and 400 in local government. While the steel industry has also been heavily hit read more

Waiters turn up the heat on Sajid Javid’s over delayed ‘tipping’ report (12 April) – The heat is being turned up on business secretary Sajid Javid over the long delay in publishing his report into ‘tipping’ abuses that have seen waiters being short-changed by their bosses. Unite, the country’s largest union, was instrumental in exposing ‘tipping’ abuses by Pizza Express and other popular restaurant chains which were pocketing a portion of tips instead of passing them on to staff. Unite activists in the hospitality industry will stage a protest on Thursday (14 April) urging the business secretary to stop procrastinating and deliver his overdue report – 4pm on Thursday 14 April outside Department for Business, Innovation and Skills, 1 Victoria Street, London SW1H OET read more

No library closures in Greenwich – Unite the Union is leading the fight to defend public services in Greenwich. If the Council gets its way, this will be a library closure, impacting not just on library workers but the much wider community. It will also signal an intensification of cuts in Greenwich. Over the next couple of months, the Council will make a decision about the future of the library. That is why we now need to step up the pressure. We have organised 3 lobbies. All will take place at the Town Hall:-

Next Piccadilly line strikes – Unless there is an outbreak of common sense among line management, two further 24-hour strikes will take place as follows: Tuesday 19 April, 12pm to Weds 20 April, 11.59am and Thursday 21 April, 1200pm to Friday 22 April, 11.59am read more

Newsquest forcing staff to decide: sign new contract or lose job (8 April) – The NUJ is calling for an immediate halt to the imposition of new contracts at the Newsquest owned Clyde and Forth Press newspaper titles in Scotland read more

BikeBiz heralds historic 28% pay rise at ECourier and IWGB campaign victory (April 7) – The campaign for higher wages for cycle couriers run by the Independent Workers’ Union of Great Britain has had its first major success, with eCourier agreeing a 28 percent pay raise for cycle couriers riding for the firm read more

United Voices of the World

Protest to reinstate ‘The Topshop 2’ & demand a Living Wage April 16 – after the People’s Assembly march on Sat 16th April United Voices of the World the union will be protesting at the playboy-parasite-tax avoiding-Cameron’s best mate-Philp Green’s-Topshop. They will be protesting for the living wage and for the reinstatement two cleaners who were just suspended for joining a union and protesting their poverty wages https://www.facebook.com/events/217272261973878/

Buy the book ‘Blacklisted: The Secret War between Big Business and Union Activists’ Author: Dave Smith and Phil Chamberlain. Blacklisted tells the controversial story of the illegal strategies that transnational construction companies used to keep union activists away from work. See the official trailer from ReelNews

Blacklist Support Group financial appeal: the Blacklist support group is desperately short of funds, to continue the incredible work in 2015 we need more finance, would you please consider making a donation, raise it at your branches and trade councils. Please make cheques payable to Joint sites committee and send to 70 Darnay Rise Chelmsford Essex CM1 4XA. Please forward onto your contacts many thanks Steve Kelly (JSC Treasurer)

‘Blacklisting mastermind’ refuses to give evidence at High Court hearing (12 April) – The alleged architect of the construction ‘blacklisting’ scandal, Cullum McAlpine, has declined to give evidence in the High Court case, due to start next month, to establish the extent of wrongdoing in the industry read more on Unite website

Over 180 blacklisted workers settled their claims after renewed offers from the firms in the past 2-3 weeks. The estimated cost to the firms for these cases alone is in the region of £15-20million plus legal costs (which could be considerably more).

There are 154 live claims remaining (across all legal teams) plus 82 recently issued new claims. The next hearing is a Pre-Trial Review on 21st April. The full trial starts on 9th May and is scheduled to run until 31st July.

Blacklist Support Group teamed up with the ‘BP or not BP?’ campaign to host a rebel exhibition inside the British Museum last weekend to highlight the unethical relationship of cultural institutions and corporate criminals. One exhibit was a Hart Hat artwork by BSG Artist in Residence, which has now been donated to the official collection under the Museums Act.

Subvesrion, Sabotage & Spying conference – with blacklisting as one of the workshops

France: Workers and youth on the streets read more