Ford’s closure plans have angered workers in East London. Workers from Ford’s Dagenham Stamping & Tooling Operations plant finished their night shift and descended on Ford’s UK headquarters as Unite convenors from around the country met management on 18 April for a Ford National Joint Negotiating Committee (FNJNC). A consultative ballot for strike action gained an 81% yes vote from the Unite tool makers at the plant, since Fords announced the closure of the plant and a strike ballot is now proceeding. 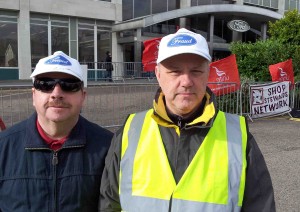 Vince Passfield, Deputy Regional Secretary of Unite told the NSSN that Ford’s simultaneous closures of two UK plants – Southampton and Dagenham – was unprecedented. “To compound matters the separate terms offered for Southampton far exceed that offered to workers at Dagenham. Workers feel they are being treated as second class citizens.”

Mark Stephens, plant convenor, said, “Never before have Ford closed a plant as quickly and the reason we’re very angry is that although they’ve promised us all jobs there are 120 toolmakers who will not find suitable alternative employment in the Engine Plant next door.” 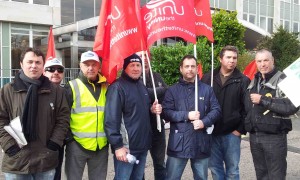 Shop Steward Domini O’Callaghan said “We’ve been kept in the dark all the time and the union has had to chase the company for answers since they announced the closure and we’re still chasing.” National Officer Roger Maddison called Fords’ treatment of the workers “an absolute disgrace.  Ford doesn’t give a shit about people who work for them.” 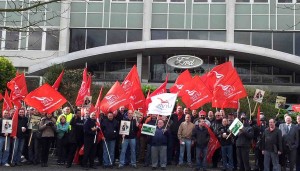 Dennis Varney, an ex-Ford worker and now a member of the Visteon Pensioners Action Group (VPAG), joined the protest, explaining, “I was 38 years with Fords and then Ford Visteon, and am now retired and part of the Visteon pension action group. I’m here today to support my ex-colleagues. Given that Ford reneged on the Visteon pensions promises that they made, it doesn’t surprise me they are reneging on this deal. The only thing that Ford understands is a bloody nose. Bill Ford, the executive of Ford and great great grandson of Henry Ford said last month in an interview in the USA that ‘employees are the backbone of the company’, and spoke about ‘honesty’ and ‘compassion in the workplace’. Yet most of us had over 30 years’ service and got nothing for it.” 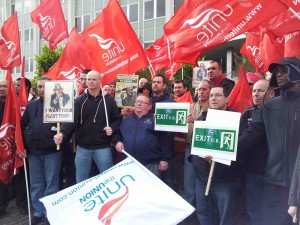 Workers chanted ‘One Ford, One pay’. Dave commented, “Ford’s always said they are ‘one firm’ but they aren’t. You’ve got Southampton terms, Genk terms, and our terms which are the lowest.”

Steve said “The Ford logo is ‘One Ford, One Plan, One Goal. And we have one question about that plan – is it to close all UK Ford plants?”

“Given what the stark prospect these workers are facing and the fact that a big part of their pay-off is a bribe not to take action, the strike ballot and this protest is very brave and must be supported by other Ford UK workers and throughout the union movement. It also shows what could have been achieved when the closures were first announced last October, if there had been a clear lead given to workers in Southampton, Dagenham Stamping and also Genk, but it’s never too late. Nothing is guaranteed but fighting now can at least force the best terms out of Ford.

“It is natural that these workers want to improve their redundancy and job reassignment terms but an attempt must be made to raise their sights that even at this late stage, the closures can be fought. Hopefully, the convenors and the national union officers have made it clear to Ford today that ‘normal’ service is over and that if these workers strike, they will be fully supported throughout the UK with a call for support sent out across the company’s European operations. There were over 50,000 Ford UK workers in 2000; there’ll be barely a fifth of that left if Southampton and Dagenham Stamping close. Every Ford worker that’s left in this country must be shown that fighting for these plants and these jobs makes their position more secure.”